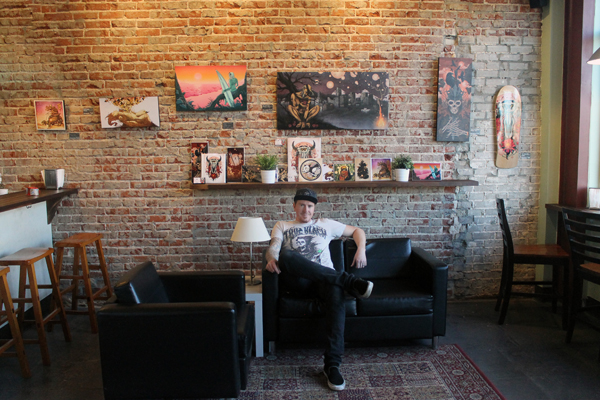 Matt Verges has been creating art out here in Colorado for over a decade. We first took notice when he began participating in some of our design contests, but when his graphics started rolling through our presses he sent us clamoring to get photos of his decks so that we could share his creations with our followers. When he hit us up to let us know about an art show where he would be displaying his BoardPusher.com custom skateboards we decided it was time to get to know one of the local artists who inspires us.
Let’s start off by telling us where it all began. How did you get into skateboarding and art respectively?

You might actually be able to trace my interest in both back to the Ninja Turtles. It was probably 1986 when I first noticed the comics and toys showing up in the local Wal-Mart. I poured over those comics, copied the art, drew my own. These were the old black and whites by Kevin Eastman and Peter Laird. I must have just gotten caught up with the rad 90s culture of the time, and gone on from there. I remember discovering “The Search for Animal Chin” around this time too. As I got older, I got into the punk and hardcore scene, and just kind of found my niche doing flyers and album covers.
That’s funny that you mention TMNT because they’re such a staple around here with our skateboarders and designers often designing parody and spoof graphics around the ninja turtles. Did that culture turn you into an avid skateboarder?

Yeah, I probably got my first skateboard when I was around 12, and could do the basic tricks by 14. I would sand down and paint my own decks. I was never really good at skating, but I also never gave it up either. For me it was more about the anti-authoritarian lifestyle, and cruising around. And cruising is about all I do these days. I mostly ride longboard now, and half the time, I’ve got a three-year old riding on the nose along with me.
When you come up with an idea for a design is it something that you know is going to become a skateboard graphic or is it something you see in that shape after the design is finished?

Most times, the composition will dictate the size and shape as we go, and later on I’ll adapt for skate deck size if I think it fits the theme. That’s one of the nice things about working digitally, the ability to adapt for various sizes and applications. What’s really great is when a piece of art works well with a wood grain background, and I can let that natural texture show through. 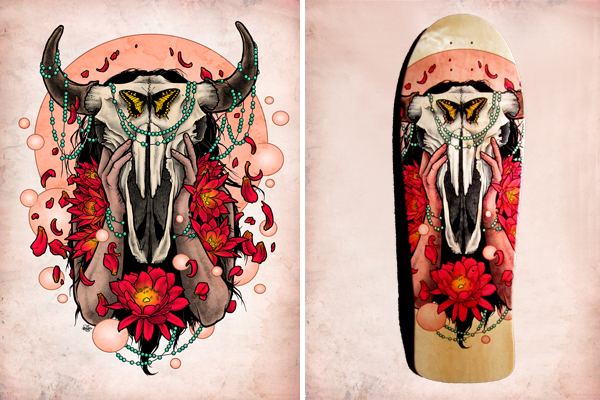 Was punk and hardcore something you found through skateboarding ala skate video soundtracks, etc.?

I first got into extreme music through mutant monster metal bands like GWAR and White Zombie. They had such an intense aesthetic too, which was really appealing to the young me. It was probably through them that I stumbled upon bands like Anthrax and Suicidal Tendencies that made me realize that skating and music could work together. I discovered punk rock shortly after, and I loved all the Epitaph and Hellcat bands that were in every skate video back then. I always had friends that were in bands, and skating was always something that was just on the periphery of that. I think really it was that base of anti-authoritarianism that brought everyone together.
Where do you create most of your work? Is there a home studio or office…?

I have an office at home that I spend a lot of time in. I have a desk to draw at, and a flat file full of screen prints. On top of that is where I do all my shipping and packaging. Working from home allows me the time to hang out with my daughter more, which I am incredibly privileged and thankful for.

What’s your process when designing a skateboard graphic? Does it start with a sketch or is it all done digitally?

I transitioned to digital around 2009, with a period of doing some sketching and inking by hand, and then coloring digitally. These days I’m 100% digital, but I still draw and paint everything by hand on a drawing tablet. I have that background in making art on paper, and I’m always trying to stick to that style even if it is digitally.
Your graphics alternate between the real and surreal and often blend the two. Is there a conscious decision to focus on one more than the other when you begin or does one overtake the other organically?

I’m often inspired by animals and nature, especially when they behave in unimaginable ways. Sometimes, I’m depicting these behaviors and events literally, and sometimes it’s seen through the lens of folklore. 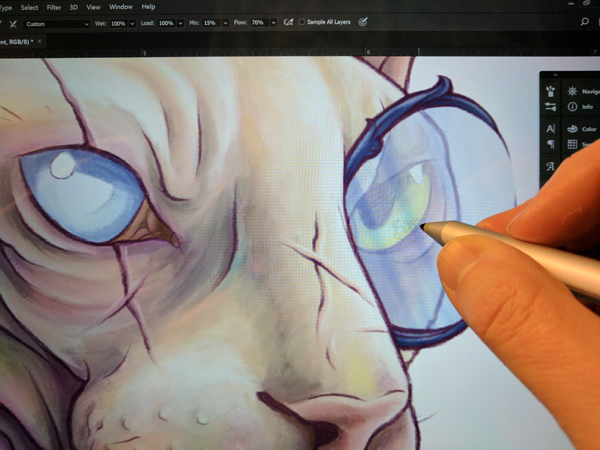 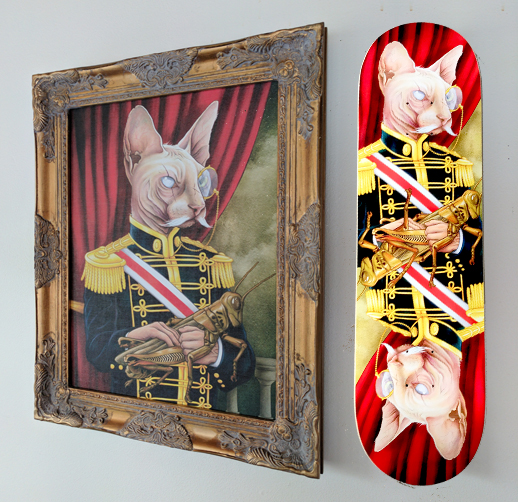 Yeah, we noticed your art appears to have a deep respect for animals and nature while also merging it with a post-apocalyptic feel. Is this a theme you like to revisit?

Definitely. I like to think that most of my work exists in the same world. The colored orbs floating in the sky are the common visual arch. Humans do exist in this world, and have left their mark in various ways. I try to allow nature to be the subject of the piece however, in the role of creator after the destruction that has ensued at the hands of humans.
You also deal a lot with death in your work, but in vivid colors. Is there an intent to bring beauty and light to that ominous inevitability?

Again with the cyclical creation/destruction theme. The end of a life sustains the lives of others, and in turn, those lives end and sustain others and so on. Not just in a physical, nourishment sense, but in a spiritual, wisdom sense as well. And there is a beauty in that. I like to think that my art is a celebration of that, and the interconnectedness of it all, in both life and death. Some people see only negativity in death, but I see such hopefulness. Having that ancient collective experience tied up in our molecules surely will guide us to become more than we are, right?

Pushead is the greatest! Aaron Horkey is an all time favorite too.
Speaking of Pushead, you also work with a lot of bands on projects, is music an influence on your work? Do you find inspiration in the sound or even a title or does the design come first before deciding what band/artist it might fit?

When I work for bands, I definitely use their music as inspiration. I like to think of album covers as sort of a collaboration. Sometimes a literal image presents itself from the music, and sometimes its more of a feeling I get when listening. But more or less, the goal is to build a world together, where the sounds and visuals can coexist in harmony.

What’s the best advice you can offer for staying creative and productive?

Find something that inspires you and try to make that thing part your daily ritual. Coffee, travel, nature documentaries, movies are some of mine. Use your skills everyday, and hone your craft. Try not to think too much about other artists style or process. Find your own way, and make it yours. Build your own world and stories. Try not to focus too much on social media and likes or comments. Get your art out into the real world, interact with people face to face, and try to keep a positive spin on everything.
You have a showing coming up at the Kanon Collective in Denver on April 6th where you’re displaying a number of your skateboard graphics, what’s most enjoyable about being a part of an art show?

I love getting to hang out with other artists and art enthusiasts. I love hearing other people’s personal interpretations of my art, especially when they’re so different than my own intentions.
Beyond your Denver show, are there any other upcoming projects or appearances we all should be looking out for?

Over the Spring/Summer of 2018, I’ll be at Denver Independent Comic-Con (DINK), and Denver Comic-Con. I’m always in-person at Kanon Art Collective for the First Friday Art Walk in the Santa Fe Art District. I’m an Artist in Residence at Black Sky Brewery, where my art is permanently on the wall alongside a host of rotating artists. Come say hi! 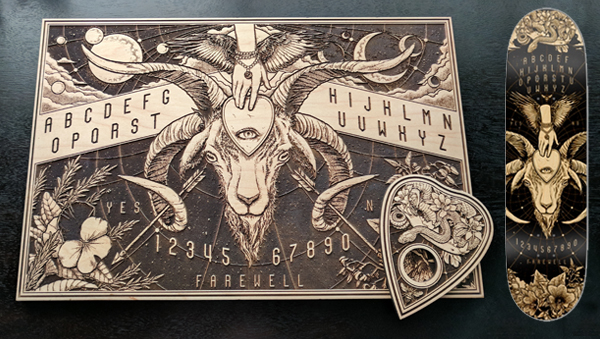 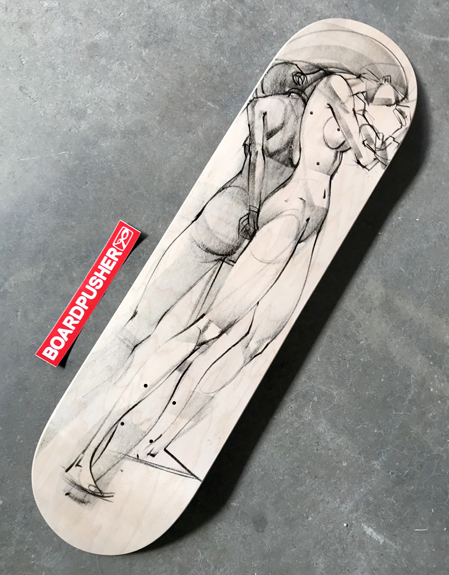 Featured Deck of the Day: “Twins” by Ryan Woodward 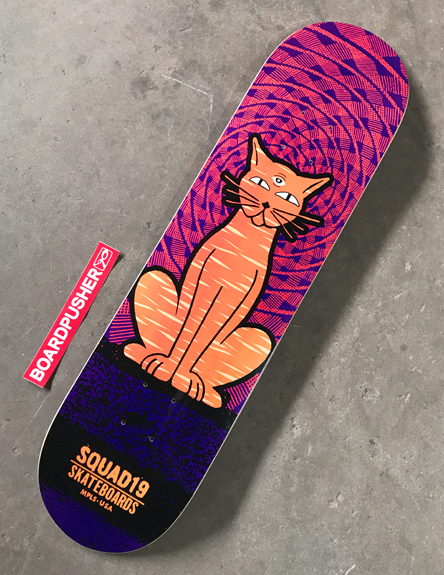 Featured Deck of the Day: “Psychedelicat” by Squad19 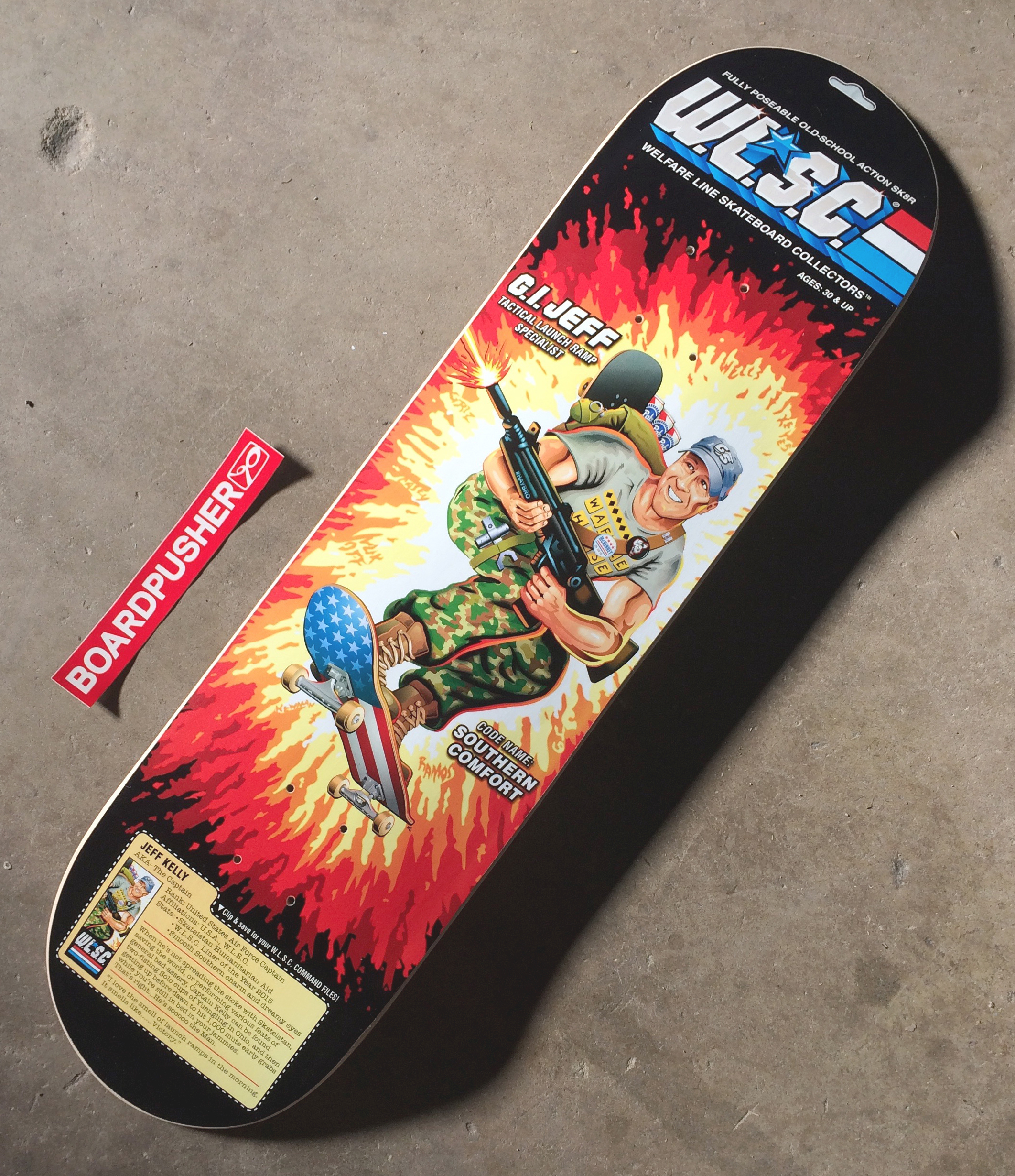 Featured Deck of the Week: “G.I. Jeff” by Mike Thomas