Featured Decks of the Day: Skateboarding in the Olympics Series by Mike Mag 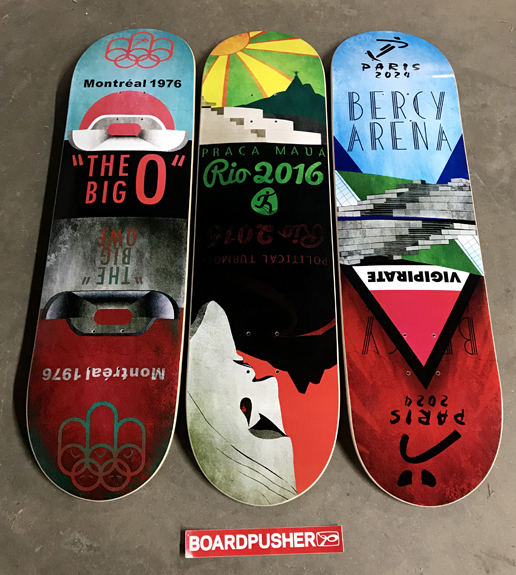 Mike Mag was heavily influenced by the addition of skateboarding to the Olympics, and the skate spots Olympic structures have created, when designing this BoardPusher.com Featured Deck series. “This series is my final project for my intermediate design class at Florida State University.  The idea began with skateboarding being added into the Olympics and the many mixed emotions that have come with it.  My designs critique the good that has come for skateboarding due to the Olympics as well as the bad that comes from the Olympics.

“Montreal 1976 Olympics:  This graphic celebrates the famous and iconic skate spot ‘The Big O’ which was built with the Olympic Stadium.  However this Olympic stadium caused much controversy as it nearly bankrupted the city.

“Rio 2016 Olympics:  This graphic celebrates Praca Maua; a beautiful plaza with perfect ground, endless ledges, and this now very famous block stair set.  The city built this plaza to welcome the Olympians during the 2016 games.  However the Rio 2016 Olympics had a litany of problems causing political turmoil in Brazil.

“Paris 2024 Olympics:  The Olympic games are set for Paris in 2024, one of the main stadiums they will be using is the Bercy Arena.  The Bercy Arena is a very iconic French skate spot.  Marble ledges, Block Stairs, Perfect Ground, a truly iconic and amazing skate spot.  However Parisians worry of potential terror attacks that may happen during the Olympics.

“Basically, yes the Olympics come with some bad stuff, whether it be huge debts, political turmoil, or terror attacks, but maybe without the Olympics we wouldn’t have these famous and iconic skate spots we all know and love.  There’s some good in the bad and some bad in the good.” You can check out more of Mike’s art as well as some of his own skateboarding clips by following him on Instagram @mikemag.

Celebrate skateboarding with a custom skateboard graphic you created yourself at BoardPusher.com.