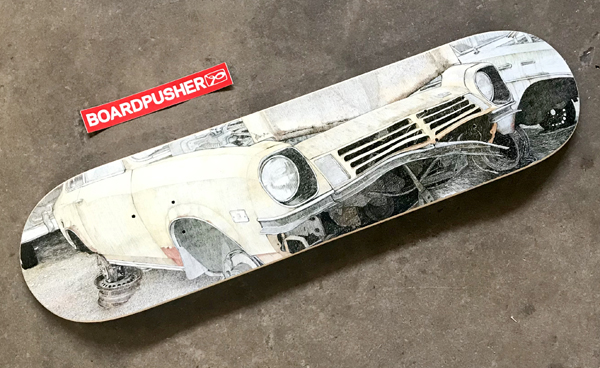 “The story may be a little long,” Daniel Brammer begins when telling us about this week’s BoardPusher.com Featured Deck, but we like long histories about the skateboard graphics that come through our presses, especially when they’re real life Christine stories like this one: “I’ve been trying to draw all of the cars I have owned and like the way the drawings look reproduced on the skateboards + my son is a skateboard nut and will eventually give them all to him. Some cars have more of a ‘story’ than others. I suspected this one (’76 Chevy Vega) was trying to kill me after a number of incidents, like a broken timing belt while making a tricky lane change on the freeway. Eventually the car started on fire after I had just replaced the fuel pump and nearly burned my gf’s (at the time) house down as it was in her garage. Luckily I was able to push it off the jackstands and into the driveway where it dripped melted aluminum until the volunteer FD showed up, which was the last time I saw it, or so I thought. Never knew what the fire dept. did with it, but many years later I came across the old vegamatic in a junkyard while looking for parts for another car (drawing of this car to follow sometime in the future). Maybe worth mentioning, this yard was pretty far away and I was only visiting because they supposedly had the particular part needed. Car was sitting precariously on stacked wheel rims so I gave it a wide berth in case it recognized me or got any ideas. Thanks again for the terrific work and great service.” Thank you for the terrific story, Daniel.

Whether a graphic has a treasured past or it’s something you just came up with today, make it a custom skateboard design at BoardPusher.com. 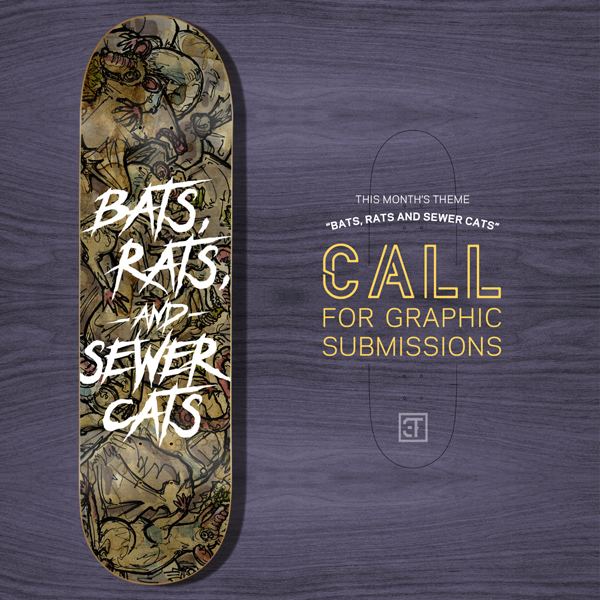 Featured Deck of the Day: “Rose Hand” by Latosha Stone

Featured Deck of the Day: “Trenchtown” Longboard by Cheyenne Smith